For the best Croatian yacht charter experience, be sure to utilize our suggested 8-day, 7-night itineraries to guide your journey throughout the Mediterranean and Adriatic seas. Our itineraries outline popular ports along the Dalmatian Coast, like Dubrovnik, Mljet, Lastovo, Hvar, Split and others. Croatian yacht charters provide a breath-taking way to see one of Europe’s premier seaside vacation destinations. Full of sprawling medieval cities and charming fishing towns, itineraries to the Dalmatian Coast begin in the south, making their way north along the coastline, and among the region’s many scattered islands.

While still relatively under the radar, charters to Croatia book up quickly—as the Mediterranean enjoys a shorter sailing season. To get the most out of your trip, aim to book for a May-September departure date when weather conditions are the most pleasant for sailing.

Your chartered Croatian tour begins in “The Pearl of the Adriatic.” A UNESCO World Heritage Site and medieval fortress, Game of Thrones fans may recognize Dubrovnik, which stood in for King’s Landing on the show.

Aside from admiring the Gothic-renaissance architecture, Dubrovnik has a number of stunning vista points. A quick trip to the top of Mt. Sr, via the cable car system, offers a stunning, panoramic view of the surrounding area.

Many of the best bars and restaurants also have convenient, waterfront seating with views of the harbor. If you’re looking to relax with a beer or cocktail, head to Mala Buza Bar for uninterrupted views of the Adriatic Sea. Then, when dinner rolls around, enjoy local seafood at Nautika, named one of the most romantic restaurants in the world by Architectural Digest. 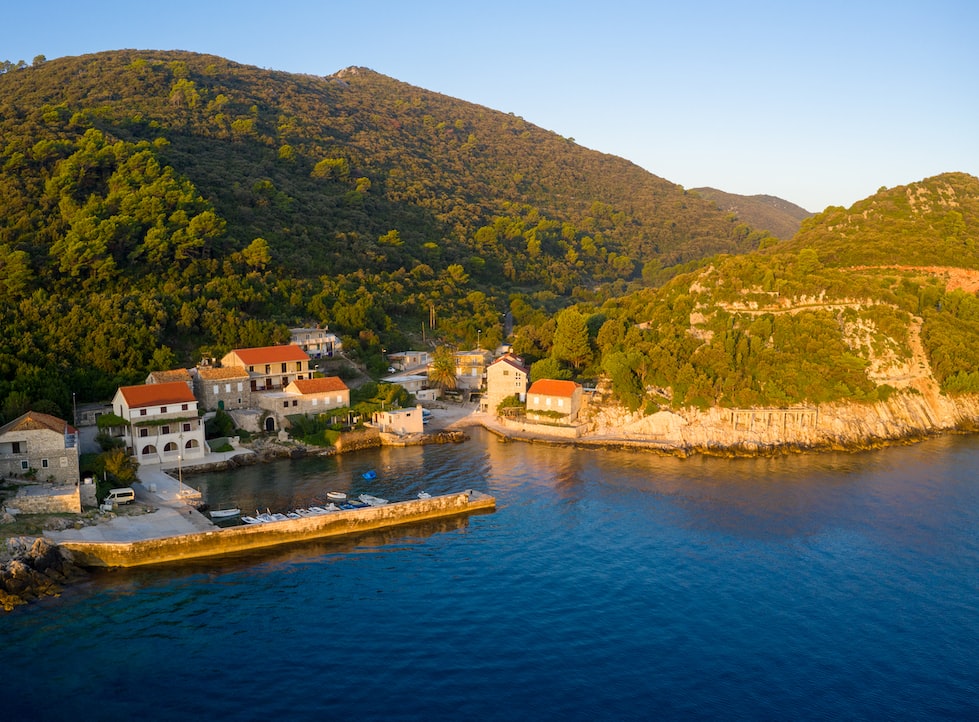 On the second day, you’ll dock at the northwestern tip of Mljet, in the fishing village of Pomena. Although the village attracts tourists with its luxury resort, Hotel Odisej, it has still retained a relaxed, private island vibe. Nightlife is limited to the waterfront restaurants along with the mooring point on the north side of the village.

Here, outdoor activities are the main attraction, with plenty of hiking paths, cycle hires, and swimming spots to keep you entertained. Amid the Mljet National Park, there are also two saltwater lakes, the Veliko and Malo Jezeros, where locals and tourists go for leisure. The larger of the two even has a tiny island, home to a 12th-century church and Benedictine monastery, which is now a restaurant.

Day three finds you docking at the sheltered inlet of Luka Velji Lago on the island of Lastovo. A former submarine base, the island was closed off to foreigners until the 1980s. As a result, it remains one of the hidden gems of the Croatian archipelago, with relatively untouched beaches, coves, and caves to explore.

For a taste of the local culture, hire a car and head inland to Lastovo Town with its baroque churches, narrow alleys, and medieval, stone houses with unique hand-crafted chimneys. In the evening, imbibe in the local wine and seafood while enjoying the night sky, as Lastovo was named one of the best places in Europe for stargazing.

While nearly all the major Croatian islands have a rich cultural and historical heritage, Vis has buildings and ruins that date back to its origins as a Greek city-state in the 4th century BC. Palaces, fortresses, and ornate churches can be found near the port, along with the ruins of a Roman bath.

Vis also has a rich winemaking tradition with grapes matured in former military tunnels. Now one of the premiere culinary hotspots in Dalmatia, Vis has a variety of fine dining establishments that are well worth a visit. Check out Konoba Jastozera where waiters hoist lobster right up from the water or the posh tranquility of Villa Kaliope, which is situated in the gardens of a 16th-century mansion.

Over the years, Hvar has earned a reputation as one of the hottest party destinations in Dalmatia. Its sunny Mediterranean climate makes it ideal for lounging at the beach or bar hopping around the main port.

Summer in Hvar also means the lavender fields are blooming on the north side of the island. Stop and smell the flowers, or take home one of the artisan goods produced for their annual Lavender Festival.

Like the other stops on your Croatian itinerary, Hvar also boasts plenty of history to familiarize yourself with. Visit the castle fortress above old town for majestic views of the coast and surrounding islands, or taste Hvar’s signature fish stew at Giaxa, a restaurant in a former noble family’s palace.

One of the first things you’ll see upon docking is Trogir’s medieval city walls, gates, and watchtower (now a cafe and music museum), which still remain intact. So too does the church of St. Lawrence—designed by Croatia’s premier architect during the Middle Ages. For a 360 degree view, climb the church’s belltower, then follow it up with a visit to one of the local museums where you can learn about Trogir’s religious and secular history. In the evening, walk along the palm-tree-lined waterfront or through the tiny streets filled with souvenir shops, wine bars, and romantic cafes.

With so many fantastic things to do, Split provides the perfect segway back into everyday life as your Croatian yacht charter along the Dalmatian Coast, comes to a close.

Which Croatian destination are you looking forward to the most?

Now that you know what to expect, it’s time to book a boat!

Other areas within MEDITERRANEAN