Yacht Activities & Events in the French and Italian Riviera

The Riviera is a section of coastline between Cannes in France and La Spezia in Italy, offering such mild winters and gloriously hot summers that it’s the perfect spot in the Mediterranean for a vacation spent aboard a glamorous yacht. While the activities and events you can get up to are wide-ranging, it’s wise to do your research and make your selections well ahead of time for shore visits.

A must-do in St Tropez is a climb up the Citadel, which has kept guard over its residents since it was built in the 17th century. It is worth the effort because, once you get to the top of the ramparts, you’re afforded a 360-degree panoramic view of the harbor and the town’s red-roofed buildings.

This part of the French Riviera provides an incredible diving haven for almost any level. At the natural marine reserve of La Gabinière, plunge into the azure water before embracing the ultra-colorful wonderland that lies beneath. You’ll see neon corals and swaying underwater plants, an impressive variety of fish and even a few large crabs or shy octopi.

The Fete de la Musique, on 21 June each year, sees the whole of St Tropez converted into a massive open-air music venue. The celebration honors the summer solstice, hosting dozens of live music concerts across all the town’s squares and open-air spaces.

Plage Pampelonne, Saint-Tropez – crown jewel of beaches, Plage Pampelonne is the backdrop of many a beach party. Select from one of 26 beach restaurants where you can people-watch, dine, drink, show off, or doze in the sun among models and celebrities.

Wreck diving off Cavalaire – explore 12 shipwrecks and a plethora of exceptional underwater flora and fauna.

Cannes – Playground of the Rich and Famous

An appealing privately guided trip in this scenic region has visitors exploring the coastal towns of both Cannes and Antibes, taking in passing views of the surrounding countryside with its inspirational medieval villages, and even enjoying a brief stop at the world-famous Fragonard perfume factory.

A top dining destination is the Bobo Bistro, located at 21 rue du Commandant André, typically described as “achingly cool” with its stylish decor and eye-catching objets d'art. Enjoy a delicious artichoke salad, tuna carpaccio or roasted cod with mash, while blending in with the other bourgeois bohemians.

At the Cannes Film Festival from 6 to 17 July, talented filmmakers from all over the globe vie for the industry’s most coveted award – the Palme d'Or (Golden Palm). While this festival is largely reserved for film industry professionals and the press, screenings in the Director’s Fortnight and the Cinéma de la Plage (Beach Cinema) can be watched on a first-come, first- served basis.

Île Sainte-Marguerite – located in the Lerins Islands just off the coast of Cannes, this is the place to stroll through pine and eucalyptus forests, edged with scenic coves that boast the most crystal-clear water you’ve ever seen. 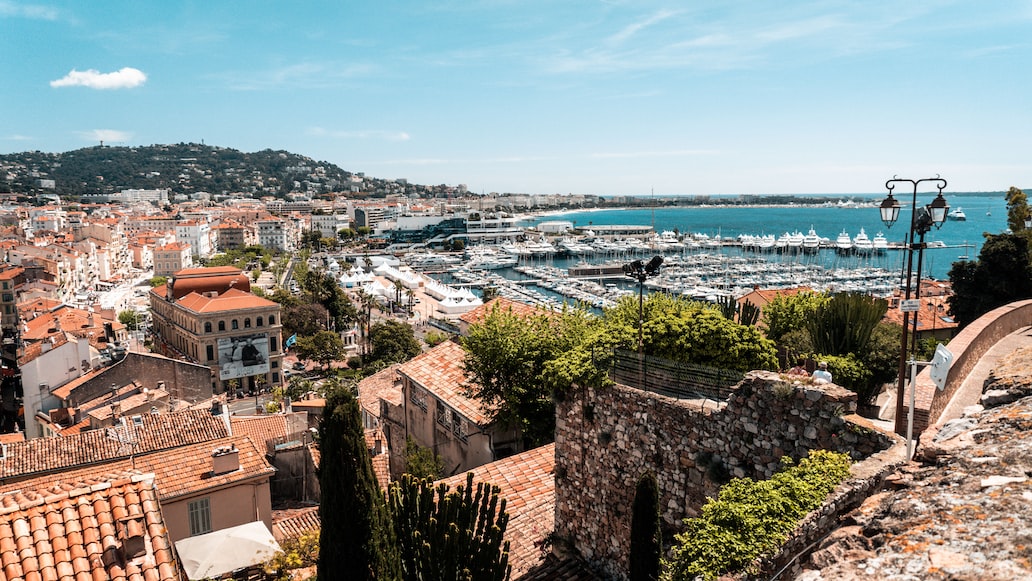 Nice – Where Bountiful Beaches Lie Side by Side

Dating back to 1948, the Nice Jazz Festival is one of the region’s most festive, and oldest, annual gatherings. It takes place on two stages simultaneously in the center of the city, has in recent times opened up to a wider variety of musical trends, and entertains as many as 30,000 people with its top-notch line-up of artists.

Art lovers will be in their element when they make a day of visiting a selection of Nice’s 19 art venues. An excellent idea is to purchase a day pass that grants access to all municipal museums and galleries, excluding the Chagall Museum. The latter, however, deserves its own ticket as it’s dedicated to the work of Marc Chagall, who even had a hand in the building’s design. Its neat lines and oblique lighting keep the eye centered on this master’s vivid colors and striking forms – just as he would have wanted.

Don’t miss Nice’s longest-running market, closed only on Mondays, which is famous for its tasty produce and abundant locally grown flowers. After a walk around here, it’s time to return to your yacht where a chilled glass of regional bubbly awaits, together with a traditional Niçoise meal.

Wall diving in Nice – famous for its incredible shades of blue, select from four main zones (Cap Nice, Villefranche Bay East, Villefranche Bay West and Cap Ferrat) or set out with a diving buddy to cover them all. 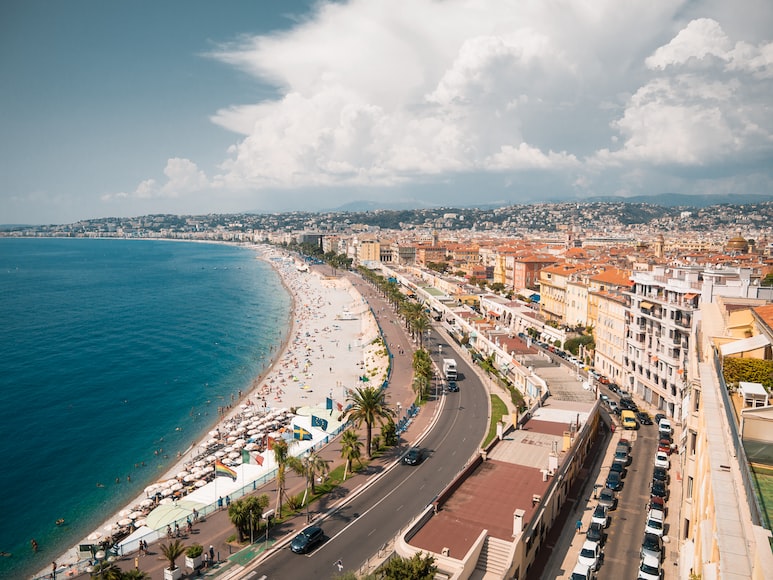 In May, the Monaco Formula 1 Grand Prix delights motor-racing fans with a circuit – said to be the slowest and toughest in the world – that stretches along a narrow strip of coast and reaches an almost vertical incline in places. Previous winners on the 78-lap course include Michael Schumacher, Ayrton Senna, Alain Prost, Juan Manuel Fangio and Graham Hill. What a thrill… and the bonus is this spectacle can be watched from the deck of your yacht.

Grab your hiking boots, a water bottle and plenty of sunscreen, and take to one of four trails in and around Monaco. There’s the Tour Around Dramont (4.39km), Fontanalba Heights (6.6km), Cap-d’Ail to Tête de Chien (5.1km), and the short but very much uphill Chemin de Nietzsche (1.2km). It’s always best to avoid the heat of the day, so setting out in the early mornings or later afternoons is your best bet depending on time of mooring.

Try your luck at the ultra-sophisticated Casino de Monte-Carlo, a regular backdrop in James Bond movies. It features a mind-blowing selection of gaming and entertainment options, from baccarat to Texas hold’em, which can be played from 2pm until 4am beneath sparkling crystal chandeliers.

Larvotto Beach, Monaco – the glamorous principality’s only public beach, Larvotto is family-friendly with its calm, shallow waters and popular with tourists for its convenient location among refreshment-hustling bars. 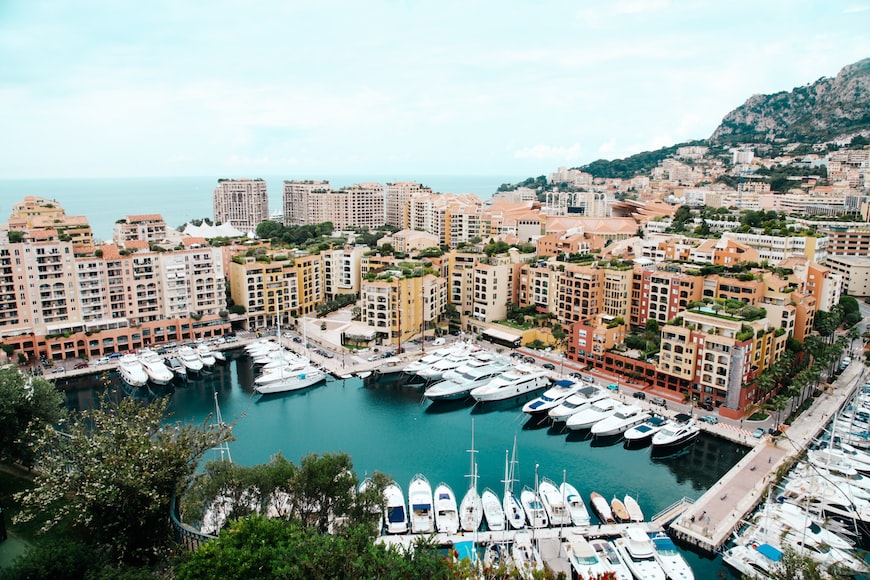 Save your appetite for Genoa, where you can go on a number of different food tours – from those focusing on street food (famous focaccia, delicious fried fish cones) to others where gourmet (Genoese culinary innovation) or traditional fare (pasta al pesto, for example) can be sampled.

Don’t miss the energetic climb up the 172 steps of the city’s Lighthouse, which has been in operation for almost nine centuries, to arrive at its panoramic terrace. Commonly known as La Lanterna, it’s a landmark that has served a dual purpose over the years – providing a warning signal for vessels and as fortification for the city’s inhabitants. At 76m in height, this building is the tallest lighthouse in the Mediterranean and offers views that will take your breath away. Don’t forget your camera or smartphone to record them.

A guide-led Segway Tour sees you exploring the best-loved monuments, squares, churches and noble places of Genoa’s medieval historic center – including those hidden alleyways of the Old Town. The districts of Porto Antico and Caruggi are two highlights – take along a raincoat in case of sudden showers. 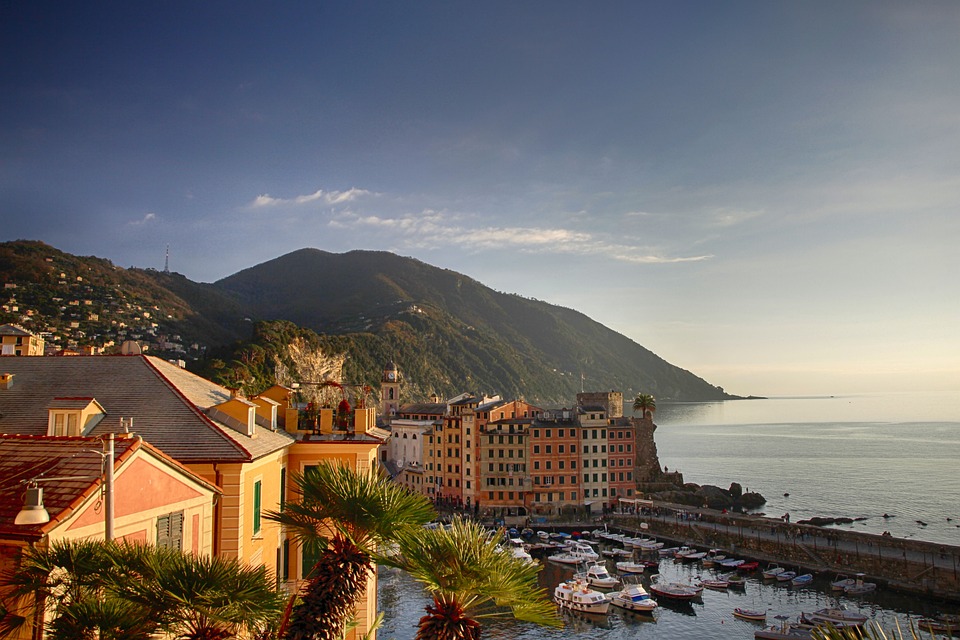 Browse the Portofino marina’s luxury shops, featuring glamorous brands from Armani and Vuitton to Hermés, along with finely crafted shoes and traditional embroidery or lace. The trend-watchers at Vogue suggest you invest in a Louis Vuitton “Promenade” canvas bag, with its multicolored scene of palm trees, cafés and bicycles – which gives a decided nod to a chic seaside vibe.

Known for its food, wine, clothing and goods markets, it’s advisable to have a browse online so that you can head to the one that appeals most when you arrive in Portofino. Pick from the Sestri Levante every Saturday morning, the Lavagna every Thursday morning, the Santa Margherita Ligure every Friday morning, and the Chiavari Antiques Market every second Saturday and Sunday in Chiavari’s historical center. Take along a sturdy shopping bag to carry your spoils.

If you have time before returning to your yacht, pay a visit to the Chiesa di San Martino, a Romanesque-style church dating back to the 12th century. This must-see piece of history, which is perched on a hill close to Portofino’s main plaza, features notably beautiful stained-glass windows and ceiling paintings. 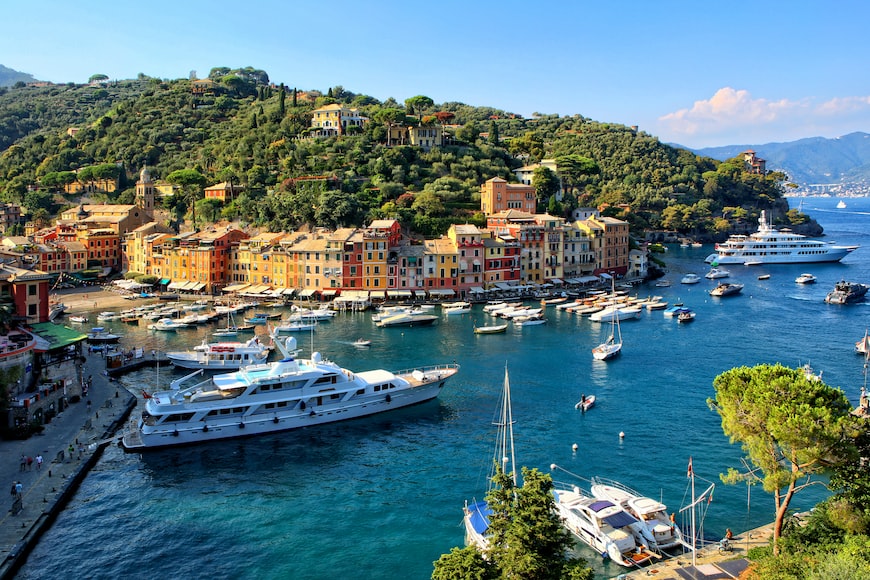 Sunrise or sunset is the recommended time of day for a paddle-boarding excursion from Cinque Terre. This is the way to experience the rugged coastline here, without battling the crowds of tourists. Coves, caves, colorful fishing villages and crystalline waters make this a must-do – especially if you’ve brought along a waterproof camera.

The Sensory Wine Tasting and Traditional Wine Cellar Visit to Manarola tantalises the senses of smell, sight and taste. The experience is heightened by darkness and atmospheric music in this well-preserved wine cellar, where you’ll be invited to savor three different white wine varietals and a selection of snacks.

The saying “when life gives you lemons…” takes on a whole new meaning when you attend the annual Monterosso Lemon festival in Cinque Terre on 23 May. Stands are set up in the streets, selling produce from limoncino (lemon liqueur), to lemon cream, lemon marmalade and even lemon cake. Don’t miss the lemon-scented stroll along the village streets. 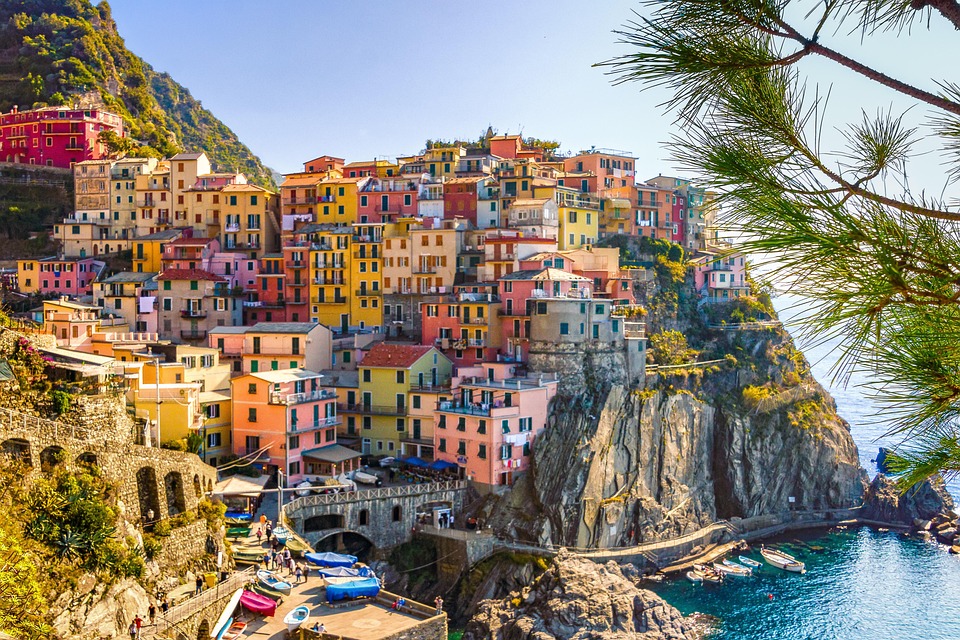 That’s the French and Italian Riviera in brief – a region offering an amazing variety of invigorating and heart-warming events and activities that will provide you with incredible dinner-party conversation – not to mention drool-worthy images – for some time to come. Make your booking here.

Other areas within MEDITERRANEAN

FEEL THE BLUE
Plus Expenses